I turned 50 years old today. That entitles me to certain privileges. I can join AARP, for instance. I can update strangers on the state of my lumbago. (Not that I have lumbago. But I can still talk to strangers about it if I so choose.) I can start putting "the" in front of nouns that don't need it. ("Did you hear about Ethel? Turns out she's got the diabetes.") I can believably reference friends named "Ethel." And I can rant at anyone younger than me on how things were done in "the good old days." Ahhh, I can hear it now.... 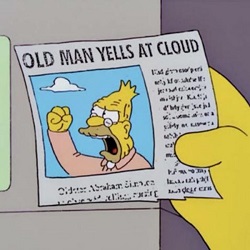 You young whippersnappers with your Tweeter and your Facialbook and your Snappychatter! Back in the day when we wanted to talk to somebody we did it the proper way: We marched over to their house, rang their ding-danged doorbell and yelled at 'em! And this music you listen to. Beyondsy and Lady Goo-Goo and the rap. It's just noise! When I was a boy we had songs with melodies and harmonies and lyrics that meant something. You know -- "Party All the Time"! "Wake Me Up Before You Go Go"! "Get Outta My Dreams, Get Into My Car"! Real music! And the movies today. Don't get me started. It's all superheroes and special effects and things blowing up. Where did the stories go? The charm? The magic? Like in Megaforce and Howard the Duck and Superman IV: The Quest for Peace? Bah! It makes me so mad my lumbago flares up!

But no. A few days ago, I wrote a post over on the SleuthSayers blog about how much I dislike the modern world and try to escape it both as a writer and reader. Here's the thing, though. That escape? It's to somewhere else -- somewhere I can go to give my brain a break from the discouraging, infuriating, heartbreaking news I see every day. Yet I don't pretend that the past I'm fleeing to was perfect. Taken as a whole, it wasn't any better than today at all, except that it wasn't quite so many ticks along on the ol' Doomsday Clock. 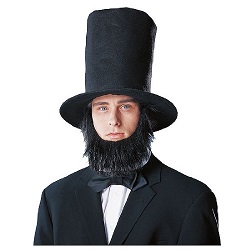 Here's something else I'm permitted to do as an official oldster: trot out a credential. I have a history degree. Yes, it was granted in that ancient year nineteen hundred and ninety. But I don't think the field's changed that much since then. It's not like we've discovered Atlantis or Noah's ark or conclusive evidence that Abraham Lincoln was an alien lizard. (Hmm...though that would explain the guy's big, dopey hat. He couldn't comb his head frills down.)

History's still history, more or less. And here's one of the things that hasn't changed about it: change. As in, it's always happening. It's inevitable, inexorable, inescapable, and resistance is futile. There is no golden era we should be striving to return to, and even if there were recreating it would be impossible. Because: change.

Take me, for instance. There's no glory that was Greece, grandeur that was Rome in my past. Which is a fancy literary way of saying I've always been a bit of a clumsy dumbass or a bit of a space cadet or a bit neurotic or a bit lazy or a bit something. I was never, not for a single second, perfect. So I don't pine for my lost youth. I'm smarter than I was at 20, happier than I was at 30, healthier than I was at 40.

Sure, it's gonna suck when my knees go or I find out I really do have the lumbago or the diabetes or the cancer or the whatever. And it's gonna happen, sooner now than later. I have my own personal Doomsday Clock, as do we all, and...well...tick tick tick, you know?

But in the meantime, no midlife crisis for me, thank you very much. Once upon a time, men of a certain age (mine) were permitted such things. They'd buy sports cars or chase young secretaries around their desks. (God -- remember when that was considered funny?) It was almost expected of them. Boys will be boys. Men will be men.

Nowadays, boys and men are expected to be different. Better. Which is change. Which is good. 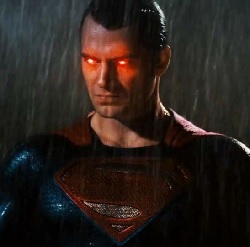 Of course, not all change is good. Superman shouldn't be a murderous asshole, for instance. The same goes for Batman. A movie theater Coke shouldn't cost six freakin' bucks. Trader Joe's used to have this stuff called "Global Village Nut Mix" that was spectacular, but they stopped stocking it in, like, 2004. And when I was younger, I used to think that the only people I truly hated were Nazis...and that was sort of like hating mastodons, because there weren't any around anymore. (Man, talk about "the good old days.")

Bottom line: I'm definitely older and arguably wiser, and although I'm not totally down with now I don't worship or long for then. Yesterday is gone, and it was flawed anyway. Tomorrow will be flawed in new and exciting and depressing ways.

Today I get cake.

I think this also means you get to talk about how you walked uphill both ways in the snow to get to school.

And yes it was better (whatever it was) in my day (whenever that was) and of course I'm right (because I'm old and know stuff).

Nonetheless, as I was telling Mabel over at the Walmarts, none of it stops me from dreaming about the future that never was and waxing nostalgic about the good ol' days that never were either.

Thanks, Mark! But walk up hill both ways in the snow to go to school? That's cushy compared to how we had it! Heck, I had to walk uphill in the snow both ways just to change the channel on the TV.

Ditto to you, too, Greg! Tell Mabel I said hi!

"I feel your pain." And I love that one of your tags is "Me Gassing about stuff."

Happy Birthday Steve! The big 5-0! By the way, an old man chasing young secretaries around their desks still is funny...so long as it is Tim Conway playing the old man.

Wonderful piece, as always, Steve! Hoping your birthday was truly a fabulous day of cake and 50 year old complaints!

Wow, 50 years old. Happy Birthday. Of course, you do realize that 50 is the magic age where some doctor gets to shine a light where the sun don't shine. I had my first colonoscopy at 47, and it may have saved my life.

Thanks for the birthday well-wishes, guys! (Even if one of them did come with an image I didn't need in my morning. Still -- noted, Bryan. I'll tell my doc to warm up his flashlight sometime before 51 rolls around.)