TMI Alert: This post will tell you more than you want to know. If you want to read something that gives you less information -- that will, in fact, leave your brain emptier than when you started it -- I suggest Break the Simulation, Kanye West's upcoming book of philosophical musings. Which is a real thing and not a joke and leads me to a philosophical musing of my own. Namely:

Anywho, upward (or downward or maybe just sideways) and onward to the TMI....

My wife and I call our relationship style "hearts and farts" because we love each other and there's nothing either of us holds back from the other. There is one thing I try not to do in my gassy beloved's presence, though: watch old movies. I love 'em, she doesn't, simple as that. So while she's in the living room catching up on downbeat TV dramas like The Walking Dead or Game of Thrones -- you know, being a normal American adult -- I'll be upstairs in bed watching Gene Kelly learn how to roll his Rs for the 50th time.

Not everything I watch is a certifiable classic. Some of it is certifiable crap. Or at least certifiably mediocre. But there are only so many classics, you know, and you've got to watch something once you've worked your way through the AFI Top 100 List. Hence some of my recent viewing choices. 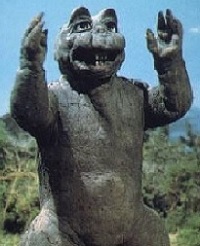 The Omega Man. (Hey, I'd never seen it before!) Earthquake and The Towering Inferno. (Hey, I hadn't seen them in a long time!) Son of Godzilla. (Hey, I...O.K., there's no excuse.) And lots of middle-of-the-road Westerns like The Tin Star and Chisum and Tribute to a Bad Man.

It was that last flick -- a meh Robert Wise-directed Jimmy Cagney vehicle -- that my wife caught me watching the other day when she'd completed her daily dose of modern tele-nihilism. The film was staggering to its extremely wobbly conclusion, so she wasn't even catching it at its best (which wasn't very good anyway). And she asked me a question I sometimes ask myself but don't like to hear from anyone else.

Why do you watch this stuff?

It's a good question. Why would I rather see a kinda lame movie from 1956 than an Oscar winner from 2018? Because most of the time I would.

It's not just nostalgia. I wasn't alive in 1956, and I don't watch movies from back then through rose-colored glasses. If they suck, I can see it. (Just the other night I gave up on a 1959 Robert Taylor Western called The Hangman after 20 minutes. And it was directed by freakin' Michael "Adventures of Robin Hood/Casablanca" Curtiz! But, man, was it dullsville, as the beatniks of the time might have said.)

I also don't romanticize yesteryear (as I blah-blah-blahed about a couple months ago). Yet I'd still prefer to hang out in the past than fully partake of the present. Today is so full of fear and disappointment and cruelty and stupidity. Yesterday was, too, yeah...but at least we got through it.

So maybe the past is my safe place. Somewhere I can go that -- though far from perfect -- feels settled, resolved, contained. Unlike now, which feels messy and infuriating and deeply, deeply frightening. I can see how 1956 turned out, more or less. 2018...who the hell knows?

That's all grossly oversimplified, by the way. Escaping from troubled times isn't the only reason I love old movies. I really do prefer the classical style of, say, a top-of-his-game Orson Welles or Billy Wilder or Howard Hawks to 99% of what's being made today. And it's not like I can't appreciate high-quality contemporary stuff when it comes along. In recent months I've seen The Death of Stalin, Deadpool 2, Annihilation, Isle of Dogs, The Post, Ladybird, American Made, I, Tonya, The Disaster Artist, Battle of the Sexes, Blade Runner 2049, Dunkirk and Baby Driver and dug them all.

And there's one current TV show I'm keeping up with, too. I like it because it's unique and clever and funny and features deeply flawed characters you can still like and root for. It's called The Good Place, which strikes me as a remarkably apt title. Spoiler/TMI alert: It's named for a place -- and a state of being -- the characters are trying to get to.

I think a lot of us like to escape the reality of today. For me, that's the best part about writing a story. I can see that same allure in old movies. Speaking of crappy, old films, ever seen a Gamera movie? Son of Godzilla is pretty good compared to those.

I watched "Son of Godzilla" with my eldest son, and we actually liked it without nearly as much irony as you might expect. We followed that up with several other Godzilla flicks, which ranged in quality from boringly blah to hilariously batshit. "Son of Godzilla" remains our fave. I've seen bits and pieces of Gamera over the years, and yeah -- the mighty turtle's movies make Godzilla look like Humphrey Bogart.