Of course, that's not quite how the old line went. But apparently "He could sell ice to Eskimos" is potentially offensive if used too loosely. I read up on it on Wikipedia and, frankly, I'm still kind of confused about when it's appropriate. I think this would be acceptable, for instance: "He could sell ice to Eskimos -- by which I mean members of either the Inupiat or Yupik communities of the northern circumpolar region but not individuals associated with the Northern Athabaskan-speaking ethnolinguistic group." But that could be wrong. Can we really trust analysis from a website that refuses to acknowledge the existence of energy vampires and Biggus Dickus? 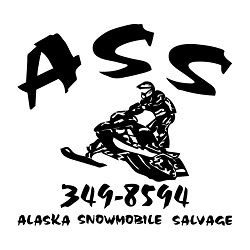 Bottom line: I couldn't sell cold weather stuff to people who live where the weather's usually cold. (There goes any chance of a gig with Alaska Snowmobile Salvage. Which is a shame, since it seems like a fun place to work. Just look at how they've embraced that acronym!) But even if I couldn't convince a window-shopping Alaska Native to take a 2013 Arctic Cat out for a spin -- only 10,000 miles on the snowdometer! -- I could, at least, treat her with respect. By not assuming she's O.K. with the label "Eskimo," for instance.

Convincing people to buy crap isn't my bag. Trying to be nice I can handle.

Which is why, I think, the new "Holmes on the Range" book, The Double-A Western Detective Agency, has done very, very well in one regard. I've sold 300 copies in the month since it came out, which isn't bad considering my marketing plan could be boiled down to this: (1) Announce that the book exists and can be purchased online.

But here's how The Double-A Western Detective Agency has been a spectacular success: As of the morning of Monday, Jan. 14, it has 25 reviews on Amazon, all of them with five-star ratings. That means nearly 10% of the people who've bought the book took the time to write a review after they read it. That's a spectacular ratio. It's neat for Dan Brown that The Da Vinci Code has 4,956 reviews on Amazon, sure, but that thing's sold 80 million copies. If 10% of the people who read it suddenly tried to review it on Amazon, it'd break the Internet.

So how was I able to beat Dan Brown (in one small, narrowly defined way)? It wasn't my marketing savvy. See above: I ain't got none. But I'm guessing most of those 25 five-star reviews came from people who've read my blog posts and email newsletters and tweets and feel a personal connection to me. Maybe they've even communicated with me directly via email or Facebook or Twitter. (I try really, really hard to respond to every message and friend request I get.) They're happy when I put a new book and assume that giving me the Amazon equivalent of a pat on the back -- by buying and reviewing it -- encourages me to finish the next one. And they're 100% correct.

Do I have a million bajillion readers, like Dan Brown? Nope. Do I have fantastic, wonderful, lovely, supportive readers? Yes indeedy.

There's a chance I'll finally add a (2) to my Double-A Western Detective Agency marketing plan in a few months. I have to see how certain factors (rights reversions, development deals, book pitches) play out. If I do decide to give the book more of a push, all those five-star reviews are going to make it a lot easier to gain some traction.

So to everyone who's left a review: Thank you!

To everyone who read the book and hated it and didn't leave a review: Thank you, too! (And sorry. I hope you like the next one better.)

To everyone who read the book and loved it but also didn't leave a review: Thank you, as well. (Hey, I'm not gonna go all hard-sell on leaving reviews now that I've firmly established how chill I am about marketing.)

And to everyone who hasn't bought the book yet: It exists and is available for purchase. Do with that what you will....

My own sales skills are about as refined as yours. Here's an example of how all my sales conversations go:

Me: Would you be interested in this product?
Customer: Nope
Me: Okay

Maybe the key for you is to summon Big Red from the pages and have him sell the book for you. He seems like the kinda bloke who can sell dirt in the desert.

And my marketing skills are about as good as yours.

FYI, it’s also possible that people have bought your book but not gotten it read quite yet. So some of those people might write reviews yet.

Eric -- I'm such a bad salesman it would be hard for me to even ask "Would you be interested in this product?" I'd be worried that it would come off as pushy. You're right, though: Big Red would be excellent at sales. Or at least at talking to customers. He might never get around to mentioning the product.

Mark -- I'm sure you're right and more reviews are going to trickle in as people finish reading the book. I'm already thrilled about the number of ratings, so everything from here on is just the cherry on an already delicious cake. My readers: I give 'em five stars!

Finally finished reading your 'Double A' book yesterday. Another great read. I haven't did my Amazon review yet, but I plan to. I noticed that someone gave it the infamous 1 star, so I had to see what else the man had reviewed. He gave a crossword-puzzle book 5 stars and noted that it had spiral binding. Maybe that's the problem: you didn't use spiral binding....... Thanks for remembering your fans.

Hey, Bryan! Glad you dug the book even without spiral binding. I considered that for a while -- "How can I make my novels feel more like a recipe book put together by the members of a Methodist church?" I asked myself -- but ultimately I decided to go with a plain old trade paperback format. That dude who hated the book said he "wound buy from author again," which sounds like an odd kind of threat but is probably just a typo. Still, I'm on guard now for anyone trying to wound-buy me. Sounds painful!

Question Sir. (Spoilers below, do not read unless you've read The Double-A Western Detective Agency first!)

What about Ann Wenddell in McCammon, Idaho?

Excellent question, sir...and one that will be answered in the next "Holmes on the Range" story!

Sorry for the "Wendell" typo...

I don't mind the typo, but I'm not sure Ann would be so forgiving. Watch out if you're ever passing through McCammon....

While I did order the Double-A Western Detective Agency right away upon release, I happened to be 2 books into a large 5 book fantasy series and, well, I just had to see that story through, you know?
But as soon as I finished that, I moved right on into things with the Amlingmeyer bros and just finished the book today.

My only complaint? It was over all too soon! (Well, anything was bound to feel like a quick read after a "quintet" I imagine.) But it felt great to dive into another Holmes on the Range adventure, and it felt like no time had passed at all since I last did so.

I reckon I should leave a review on Amazon too, and I'll try to do so when next I'm tromping through there, but I just wanted to express my hopes that there are more adventures and mysteries to come! Certainly with the introduction of a few more interesting characters into the AA Detective Agency at the end of the book, it sure felt like a "fresh start" or "new direction" of sorts.
That's my personal hope at least, because I know I'm interested in seeing where this direction takes them!

Anywho, that's all I wanted to say for now. It was a great read!

So glad to hear you dug the book, Michael! I'm not sure when I'll get around to the next book in the series, but a few things I do know: (1) I've already got a plot in mind that I love, (2) those new characters will definitely be in the mix to liven things up and (3) I won't make everyone wait nearly so long this time.