The Man from A.S.S.
Man of the West 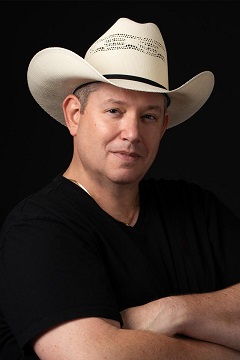 Once in a blue moon — or really it's so infrequent it's more like a plaid one — I like to swing the spotlight away from myself here and do a Q&A. This seemed like a good time for it because I already had some Q's lined up for my partner in an exciting new venture: John McLain, narrator of the just-released Double-A Western Detective Agency audiobook. (The audiobook can be found here on Amazon, BTW. You can also listen to it via Audible. Click here if you want to give Audible a try but haven't signed up for it yet.)

John did a great job bringing Big Red and Old Red to life. (If you don't believe me, scroll down to the end of this post to hear a preview.) How'd he get into the narrating game? And what's his secret for reading 75,000-ish words out loud in, like, 30 different voices without losing his danged mind? Read on for the A's....

Me: How did you get started as an audiobook narrator?

John: Well, I spent most of my early career in radio broadcasting as a personality and producer, back in the day when it was really personality-driven. It was a wonderful creative endeavor, and it always felt very, very natural to me. But after 15 years or so, radio started becoming more scripted — more plastic if you will — and it just wasn’t very satisfying anymore. So I began seeking something new. It was then that I discovered the musical theatre. I was in love, but I needed to find a way to make a living. So I began to study voice acting, thinking that I would land in the commercial voiceover world — but then a chance meeting with the legendary Patrick Fraley led to my discovery of audiobooks. Here at last was a medium where I could use my production skills, as well as my newfound love of acting. It’s like doing a play, only I get to play every role! So I studied with Pat, took my fresh demo to New York, and the rest is history. Two-hundred titles later, I probably love it even more now than I did when I first began.

Me: You've narrated all kinds of books. Looking over your audiobook credits I see mysteries, thrillers, horror and non-fiction. And a lot of Westerns! Was that a genre you wanted to get into from the beginning? Or did you just kind of drift into it because, as a narrator, you've got an affinity for it?

John: I’ll say that if I had my way, yes, I’d do a lot more Westerns, mainly because that’s my favorite genre to read for enjoyment. But I knew at the beginning of my career that it wasn’t realistic to expect to just tell my favorite types of stories all the time. One other thing I’ll say, though, is that I’ve learned to appreciate a lot of genres that I wouldn’t normally read, which I think has helped to make me a better, more versatile performer. But yes, Westerns are definitely number one for me, and I certainly wouldn’t mind narrating a lot more of them. Campfire storytelling at its finest!

Me: Who are your favorite Western authors? 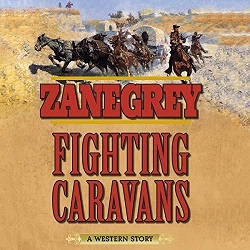 John: Louis L’Amour is my absolute favorite. When I was a boy, my grandfather was seldom without a L’Amour paperback by his favorite chair. When he’d finish a stack, he’d pass them to me. When he passed away, I received his entire collection, and I cherish them. So aside from being a wonderful writer, I’ll always have a very special, personal connection to his work. I also love the legendary Zane Grey, and have been fortunate to have narrated a handful of his titles. I also enjoy William Johnstone, or Jim Thompson if I’m in the mood for something darker. And one other comes to mind -- one that I’ve only recently discovered. An author with a gift for developing wonderfully rich characters and snappy comedic wit. You probably know of him. His name is Steve Hockensmith!

John: A wonderful thing sometimes occurs when working one-on-one with an author. It’s a sort of connection; or, stated differently, we “get” each other. This novel was one of those moments. I knew almost right away what you were trying to accomplish with Old Red and Big Red. Unfortunately, I can’t really explain how this “thing” happens. It just does, organically, and it’s so wonderful for an actor. As a rule, I approach any new set of characters that I meet exactly like I would in the theatre. What are their attitudes? Life experiences? What might they look like? And on and on. And depending on the “connection” that I tried to describe above, a voice begins to take shape in my head. And that’s when the fun starts, because I can then really inhabit that character through how he or she communicates verbally, and in some cases, even non-verbally. Plus, in the case of a comedic work like this one, I can really sink my teeth into how these two brothers interact with one another. You are a wonderful writing partner for me as a narrator, because your characters are so well developed. It makes my job in bringing your story to life easy. It’s very freeing as a performer. So, thanks for that -- because it doesn’t always happen that way. 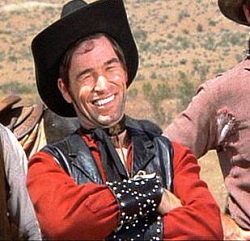 Me: Thank you, John! I could tell you got it right away. Sometimes when I hear narrators trying to do Western-y, "cowboy" voices it makes me cringe because they lay it on so thick. They end up sounding like they're trying to do a Burton Gilliam imitation. That didn't rear its ugly head with you for a second. Did you grow up in the West?

John: Well…sorta. I hail from central Oklahoma, and yes, I grew up in a rural setting. There were cattle and horses, and plenty of room to run and play, ride bikes, shoot, or whatever. And plenty of chores, too. Most weekends were consumed with various work around our place. We grew enough food just for us to eat, and then Grandma put up what was left over. To me, it was idyllic. I remember many nights camping out in the back part of the pasture, and staring up at the stars. I dreamed a thousand adventures out there. In fact, in real life I have a legit Okie drawl, but a lot of that was trained-out during my radio days. But it’s a really handy tool to have as a storyteller. And even today, one of my very favorite things for my wife and I to do is catch a good rodeo.

Me: Wow — it does sound idyllic. And like the perfect prep for narrating a "Holmes on the Range" novel years later. What's your process like when recording? Do you have to pace yourself? I tried to read a story of mine once for a podcast and it drove me crazy. After recording for a few hours and only getting about half-way through, I started to lose my voice — and my sanity — so I quit. How do you keep from burning out on a project?

John: Audiobook narration is a marathon, not a sprint, and so yes, pacing myself is very important. Honestly, though, my brain wears out long before my voice does. I have considerable vocal endurance, built-up from years of singing in the theatre, doing long radio shows, and now from audiobooks. But there’s a real danger there — I have to be very careful to monitor my mind’s ability to stay in the story. This can be hard to do, especially for a narrator like me who records at home. In my studio, I wear all the hats — along with being “the talent,” I’m also the recording engineer and the director. As such, I must remain very aware of my performance as it’s happening. Am I still fully immersed in the story? Because the moment I drop out of the "suspension of disbelief," so will the listener — and this is absolutely unacceptable. Not only does it destroy the listener’s experience, I believe it also dishonors the author’s art. Every book is different, of course, but if I detect that I’m only 99% in the author’s world, it’s time to call it a day. In terms of burnout prevention, that’s a simple matter of loving what you do, combined with the understanding that you won’t love every book that you are cast to do. That’s all part of the job. But every book, whether I like it or not, carries the same responsibility for me as the storyteller: honor the material with the best possible performance I have in me. This is a covenant between the author, the listener, and myself that I take very, very seriously.

Me: It shows! So what's up next for you?

John: It’s hard to say! One of the fun things about this job is that you never know what’s coming along. Might be a biography, or a chilling crime novel, or a non-fiction book about some topic I’m totally unfamiliar with. Many audio publishers are preparing their summer releases, and are in the process of casting them. Of course, as I mentioned before, I’m always hoping that a new Western (or a classic one!) will ride into the studio. But whatever it is, I’ll accept it with gratitude, and I’ll keep telling stories as long as folks want to keep hearing them.

Click on the file below to get a taste of John's work on The Double-A Western Detective Agency.

I've listened to a number of audiobooks but never really appreciated the craft until this interview. It's interesting to hear how similar his approach is to theater.

Sorry to bring this up, but am I the only one who immediately thought of Die Hard when reading the post title? Yippeekieyay!

You weren't the only one to notice the similarity in names, Eric. But out of respect for John I kept the McLain/McClane jokes out of the Q&A...and saved them for my e-newsetter....